Four Ways Riding a Horse is Like Driving a Car 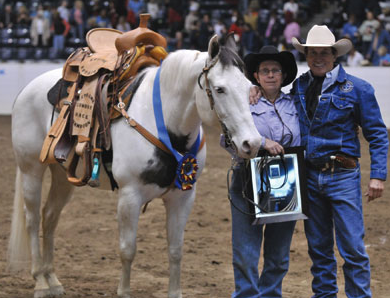 The winner of this 2009 national competition, before a coliseum packed with thousands of cheering, screaming, fans giving her a standing ovation, was 57-year-old Sally Addington, on Ghost, a grade paint gelding with one black ear and a spot on his hind. (The full story here)

She took the last of a four-bump jump series with no hands – her arms stretched straight out from her shoulders, reins dropped over the horn of her big Western saddle. 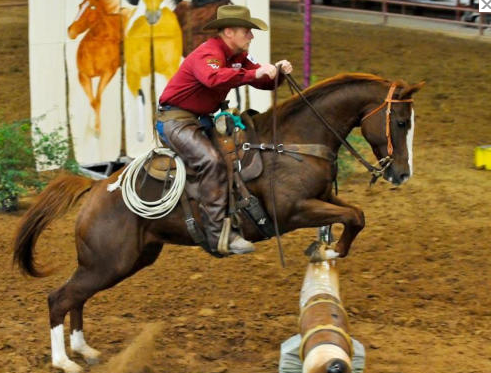 From the Extreme Cowboy Association Archives

RFD TV viewers may have caught televised versions of this highly entertaining horsemanship extravaganza in the last three years.  Viewers become instant fans, upon exposure to this entertaining contest of mental and physical skills on and with horses that originated on Cameron’s Texas ranch. The only entrance requirement is to be over 18 and pay a $250 fee.

Cameron calls it “a judged race through an obstacle course that is designed not only to push horse and rider teams out of their traditional “comfort zones,” but also to test communication between horse and rider and the horsemanship skills and athletic abilities of each competitor.”

The horses — a 4-year-old spotted saddle horse, a couple of big bay Quarter Horse stallions, a Missouri Fox Trotter, a bulky Haflinger pony, a greying 21-year-old chestnut pony, a big blocky white horse with a black ear, a dun-colored mule, a couple sorrels with some Quarter Horse in them…

The riders – varying from 98 to over 275 pounds – including a 20-year-old gymnast, a middle-aged woman just recovering from wrist surgery, a 65-year-old hearing aid salesman with a bad knee, and a bunch of cowboys and cowgirls whose ages and sizes fall somewhere in between.

What You Have To Do

The course:  When you hear “go” and the timer starts, run your horse around the arena as fast as it can run, heedless of the screaming, clapping crowd, odd obstacles, unhappy calves in gated enclosures and an impressive speaker system loudly describing the activities.

Competitors are evaluated by a panel of three experienced horse trainers. Judges award 1-10 points based on: horsemanship, cadence, control, horse’s attitude, and overall execution. Horses and riders must complete each obstacle within a set time to receive points. Uncompleted tasks are left behind as the contestant moves on to the next obstacle. Times are translated into points.  The highest score wins.  The top three finishers get cash and prizes.

Ready to try it?

Submit an application explaining why you’d like to compete with a check for $250 and you may end up at one of the half dozen competitions held around the country each year.

Created by Cameron and Ryan Dohrn of HorseCity.com, the first races were held at Cameron’s ranch in Bluff Dale, Texas, in 2005.  The Extreme Cowboy Race™ airs on RFD-TV and is also available on HorseCity.com for those who do not get RFD-TV.  For more information:  http://www.craigcameron.com/extreme.html

This was my introduction into the versatile horsemanship competitions.  I’m happy to report that Sally and Ghost went on to travel around the country, in her pickup pulling a two-horse trailer, from California to the East Coast where she won a huge Western saddle for taking first place out west.  In 2016, Sally and Ghost were fourth in Columbus, only because the big guy didn’t want to step into a plastic baby pool.  Let’s hope they keep winning when Sally has a 7 in her age, setting a great example for retirees everywhere!