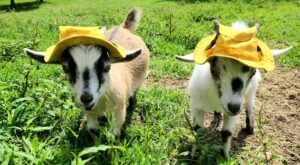 Apple Bottom Jeans and Boots With The Fur joined First Farm Inn in June. The Nigerian Dwarf/Pygmy crosses are half-brothers born one day apart in March 2022.

Carolyn began training them to follow her and come when they’re called the day they arrived. Boone County natives, Apple and Boots will do just about anything for a treat. 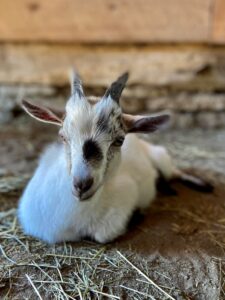 More entertaining than we ever could have imagined, within weeks they learned tricks that keep everyone smiling – even before we added hats! Boots loves his neck, back, and face scratched while Apple is mostly interested in chow.

Small enough to pick up and hold now, they could grow up to 80 pounds.

Ostensibly, they were purchased to eat pasture weeds left behind by the horses.  However, they prefer to eat hay served in a feeder, break into horse feed bags and chow on flowerpots when we aren’t looking.

Because our fences aren’t capable of containing them, the goats graze with the horses on perfect weather days, go out when we ride and on walks with Carolyn, as well as command performances in the yard and trekking thru the woods with guests. 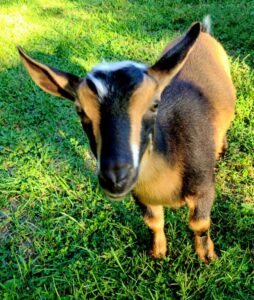 Like horses, it’s important for goats to always have a friend.  Worried that if something happened to Boots or Apple, the other would succumb to loneliness, in September 2022 Carolyn brought two younger kids – bottle babies — home from a dairy goat farm in Williamsburg OH.

Born in May 2022, Hot Like a Toaster is a Nigerian Dwarf who somehow “unexpectedly” got in Carolyn’s Jeep.  Toaster is the goody two-shoes of the goat group, surprisingly calm and rarely gets into any mischief.  He likes foraging for food, receiving neck scratches, and chewing on clothes! Occasionally Toaster will engage one of the other goats in a headbutting battle, but generally coexists peacefully with his goat brothers. 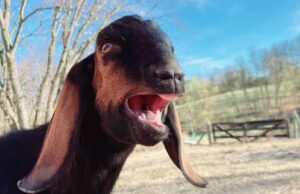 Conversely, Anarchy is a wild boy, born July 29, 2022.  He was an 8-week-old bottle baby for his first month with us.  Originally named Baggy Sweat Pants and called Pants (to follow the song theme), it became obvious that didn’t fit him.  A mini Nubian, Anarchy will likely mature to more than 100 pounds despite the word “mini” in the name of his breed. Anarchy has a fun, friendly, and carefree personality. He knows no stranger and loves to meet new people. He also enjoys knocking everything onto the ground and picking things up with his mouth and tossing them to the ground. Luckily, he is so cute with his long floppy ears and constant goat dancing, that nobody can hold his innumerable goat crimes against him! 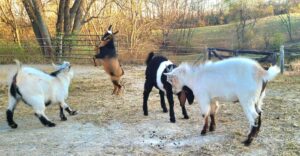 Warning: do not combine a young animal lover (willing to care for an endless number of creatures) with an old animal lover with land and a big barn… My first savings account, started when I was eight, was to save up to buy a lamb. That never happened, but we just learned about Babydoll Sheep….