Learning to ride horses at First Farm Inn means communicating with your new equine partner in ways he can understand.  Unlike traditional “trail rides,” at First Farm Inn we actually direct and communicate with the horse.  Horseback riding also means learning to balance so your horse can trust you.  Since horses have the second longest memory in the mammal kingdom, after elephants, understanding their history helps you understand them. Here are short bios of our riding horses.

A gentle giant, Bode was born 6-16-99 to a spotted mare who had been bred to a Belgian stallion.  He is registered as Bodacious in the Spotted Draft Registry. Bode is our herd leader at 16 hh and about 1500 pounds, depending on the season. He joined our herd in ’05 after having seven owners in his first six years.  He still carries evidence of damage done to him then.

Bode has a round back and is very sensitive to balance so he doesn’t tolerate out-of-balance riders well. Kind and courageous, he will go through or over anything and look out for his fellows. Unlike all other horses I’ve ever known, “spooking” isn’t part of his behavior.

While some riders are intimidated by his size, Bode generally inspires confidence for thoughtful, balanced riders who appreciate his caution and careful foot placement.

Buster Brown is a Percheron-Thoroughbred cross, chocolate brown with a star, 16.3 hh and foaled in 1999.

His mother was taken away when he was four days old to nurse a Thoroughbred, but he was lucky enough to be sold to a “nurse-mare foal” rescue and bottle fed. His training began at two with a local woman who gave him great care until medical problems forced her to sell him to us in 2011. Our vet has known him since then!  He thinks he’s a kitten and loves treats.

A well-trained and talented dressage horse, Buster is better with a quiet rider who won’t inadvertently cue him too strongly, confusing him or pushing to move too quickly. His very round back requires a well-balanced rider who instinctively will adjust the saddle if it is even slightly off-center. 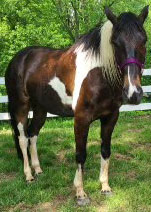 Likely foaled about 2018, 15.3 hh Domino’s heritage probably includes “Rocky Mountain” or “Kentucky Mountain” horses, known for their small stature and very smooth gaits. On March 2, 2021, we drove to the very Western end of the Commonwealth and bought him from a woman who likely wore him out and drugged him before we got there. The most expensive horse I’ve ever bought, Domino reared and bucked when I rode him in the arena later that week. 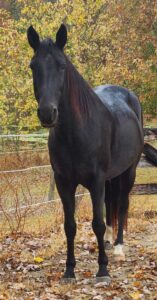 Juno is a forward black gelding who moves with a big stride.

Dental work and a month at a horsey boot camp gave him better manners. Like most youngsters, Domino’s impatient and wants to move all the time.  Stopping and standing are his least-favorite activities.  His long floppy lip is constantly playing.  A rider who can cope with his playful antics will enjoy his super-smooth gaits.

Juno is a 14.3 hh black, short-coupled, mixed-breed gelding who joined us in October 2022, after going through an auction in Southern Indiana.  Likely foaled in 2014, he has two white hind socks.  A forward guy, he likes to move out and looks gorgeous doing it.  His knees come up like a gaited horse and his forelegs reach further than his nose, which is attached to a very short neck.  He’s getting comfortable here and learning more about how to be a well-mannered horse.

Zinger, a handsome grey gelding, is growing up with Carolyn’s guidance.

An unusual “rose-grey” Arabian mix, five-year-old Zinger is Carolyn’s training project.  The spunky little gelding went thru an auction barn in Bardstown, KY and landed with a young trainer who gave him a good foundation.

Still a youngster, he’ll take some time to decide it’s always better to listen to the human with the big brain!  Meanwhile, he knows Carolyn always commands his respect!